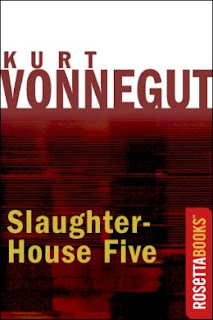 This Book was written by a World War Two veteran at the time of the Vietnam War marrying the Existentials coming to the fore in Philosophy commenting on the absurdity of life with a generation who were in line to go to War ( a time when like Michael Moore , even juniors who were 12 years old feared , and in some cases went to war when they hit 18).Hence the meaning of the oft-occuring leitmotiv "...and So it Goes.." which to us seems a flippant remark , but to the readers of the time was a loud and clear scream at the political system that systematically failed to end the wars called for by authority that butchered  the century.

The fuller title of the work also contains "The Children's Crusade - A Duty-dance with Death" which gives added thrust to the argument that in the case of an open-ended conflict like Vietnam ( and now the War on Terror) the political leaders and their backers are sending kids who are still in primary school to war , with the pre-ordained patriotic propaganda of participating in a noble cause not to dissimilar to the disastrous 13th century crusade that led many poor to their deaths and even begging long before they ever got to their destination.

This marvelous lecture puts into context the background , ideas , reception and current relevance of the Book.

It was thought for a long time the lead character Billy Pilgrim was fiction of the part of Vonnegut , but in this interview he reveals , amongst many other insights, he was based on a real person.

Posted by Tariq Kataria at 1:46 PM No comments:

THE IMPRESSIONIST by HARI KUNZRU 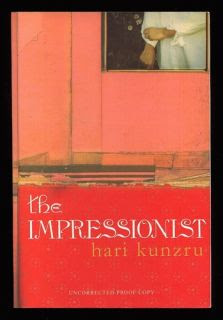 This excellent review from the Observer calls the book just about right. This debut Novel does give the impression of fluff meets musac orientalism , nothing like the substance of Black Orchids by Gillian Slovo.For a debut Novel it just makes the cut , but being a candidate for Whitbread Prize says more about the power of corporate powers to control the reading market than the bursting forth of a genius in a cream always rises to the top manner.

"Throughout the book, Hari Kunzru has pursued an odd strategy of alternately arousing sympathy for his hero and quashing it. He will fill the reader in on things that Pran Nath/ Robert/ Jonathan can't know, but seems dim for not noticing, like the fact that Professor Chapel the anthropologist is actually an obsessive-compulsive who only does fieldwork when his accumulated tics make Oxford unbearable. Towards the end of the book, this strategy reaches its own odd climax. Jonathan agrees to accompany Professor Chapel on an expedition to Fotseland, though his motive is entirely to do with the professor's lovely, capricious daughter, Astarte."

Even the Amazon product description is moved to accept  "In some ways Kunzru is almost too ambitious. There is so much crammed into the pages of The Impressionist that some of it, almost inevitably, doesn't work as well as it might. However, as the shape-shifting Pran Nath moves from one identity to another, knockabout farce mixes with satire, social comedy with parody. And, beneath the comic exuberance and linguistic invention, there is an intelligent and occasionally moving examination of notions of self, identity and what it means to belong to a class or society. --Nick Rennison"

The Book does try to convey the lesson that trying to change your identity to fit the norms of society will only yield , at best , a thin,vacuous , veneer of superficial hollowness ( something we see in the cringeworthy and pathetic aping of the West we see in Bollywood films).To be happy you have to be true to yourself , your heritage and more importantly the Universal values of Human Civility as dictated by your Childlike conscience.

In the video below Hari gives a lecture about writing in the computer age , which says a lot about the niche he is looking to fill , though the concern is what exactly does he want to fill it with.At this moment it seems more fluff than substance.


"This is a riveting story centred on the subject of identity and whether anyone could impersonate another human archetype beyond the deep-seated core of the self. What lies beyond the self? And what damage does it do to a person to go there? Questions of race and psychology are raised by this perceptive and adventurous writer. This is a brilliant book: witty, energetic, searching, thrilling and beautifully written."

Posted by Tariq Kataria at 2:33 PM No comments: