Written several years prior to the genre attributed to Dan Brown , Umberto Eco had already debunked the myth of the conspiracy theory , examining the self-prohesising momentum , not unalike the swings of the Pendulum described by the scientist Foucault ,in which every piece of evidence counter to the conspiracy is simply dismissed as the
insincere machination of an enemy that can only be resolved by the righteous elimination of the evil entity.

The reader is at first led to laugh , in a manner in which the laughing with or laughing at is clearly spelt out , with the almost pathetic attempt of the author to draw one into the semi-hypnotised dogma trying to masquerade as a convincing rational explanation of reality , we even get to a point on page 138 in which a simple glaring arithmetical error is imputed into a bizarre kabbalistic quasi-mathematical formula , yielding to a completely incorrect sequence of numbering leading to a cataclysmic wrong numerical answer from which the whole sum of history past and present is computed to the end game of a number.

If you have the patience to stick with this farce one will be rewarded in the last 20 pages or so by a conclusion in which the reader realises it is the author who has been taking the complete mickey and laughing at the reader all along.

Umberto has the perfect antidote to the conspiracy theory hiding behind faux mathematics as a veneer of legitimate science , it is the simple and crystal clear concept of Occam's Razor , namely the simplest non-complicated explanation is more likely to be true than a vast complicated mushrooming ever-conspiring theory.

An especially illuminating side story is one about two Italians from the same village during world war 2.One is fighting on the side of the partisans , the other is under the employ of the nazi supporting fascists.After hostilities the two meet up , the partisans asks the fascist why he participated in a violent assaults on the village ordered by the nazis , the fascist ( now an ex-fascist in the classic way of the Italians authoritarians post -45) states he was under orders on pain of harsh reprisals from his overseers thus having little choice in the repressed constrained times.The partisan chides the fascist that he should have made a deliberately botched and clumsy attempt to commit the reprisal , thus allowing the villagers ample warning to evacuate themselves from harms way , and allowing the fascist to "fulfill" his mission as far as the masters were concerned whilst also allowing the damage to the villagers on the ground to escape the worst excesses of the atrocity.Contained within this anecdote is the story of Italian bureaucracy and the role it has played for the past centuries in curbing the worst excesses of the competing ruling blocks on the local regional populaces , something which is misconstrued , even today , as an inefficient and blatantly corrupt practice.And with Berlusconi in charge today , with a barely re-constituted Fascist of the old school primed to take over if anything happens to the number one , who is to say that the painfully derided Italian Bureaucracy is not the best ally Italy has at the moment.
Posted by Tariq Kataria at 1:26 PM No comments:

IN THE CELLAR by Jan Philipp Reemstma

Heir of a very large Tobacco Fortune and respected Academic was kidnapped on the way across the street from his own Home to the House across the street he used as a research and workspace , the beginning of a 33 day incarceration in which a stable , healthy , comfortable family life was shaken completely.

In this account of the disorientation , fear and deep uncertainty Jan recalls an experience that reminds us all of the tenuous flimsy fragility of homely relations and stability we easily take for granted. .As the acceptance of the situation takes the place of the initial shock , the various "personalities" of the victim based on the inter-relations of his close ones ; work colleagues and professional institutional engagements lend themselves towards a spare solitary interaction between him and his spare deconstructed self.

Throughout the crippling uncertainty and the not-knowing of the ultimate outcome he is drawn inscreasingly to seek to examine and resolve within himself the "incident" which caused this whole life-changing sequence of events " it was important to recognise what caused it , to know one is not insane , that it simply corresponded to the insanity of the situation in which one person was omnipotent and the other helpless."

After the experiences pass the phase of any reasonable expectation of an early release , from the utter helplessness and fever-pitch stress the victim feels it is not surprising a touch of despair clouds over " He was the object of exchange , with no role of protagonist.He was robbed of all spiritual resources from which he otherwise might draw strength." is one passage Jan describes about himself in the third person as he is now dealing with the thoughts of a Man he hardly recognises from the person who innocently crossed the road only a few short weeks ago.He goes on in page 192 " that guilt can declare itself so insistently in tandem with shame...difficulty of coming to terms in ones heart with the sudden irruption of forces."

After a while ones gets the feeling Jan shares the thoughts and feelings that must have gone through the Minds of Anne Frank , the Beirut Hostages , the Missing in Argentina and countless umnamed victims of individual and organised criminal kidnapping , many never to retell their story again.

On page 195 we hear the pain of not only victims of kidnapping the world over , but also the anguish of there Families " absolute helplessness....to being delivered over to other people."

Rather sadly , the kidnapping of innocents is a growth industry since the war on terror , with state-sanctioned kidnapping being the highest riser.The population of Guantanamo is said to be mainly composed of innocents kidnapped for the sake of gaining lucrative bounty payments who were then handed over to the US and still languish in jails without ever being charged or being able to clear themselves or have any contact with their families.

To be fair to him , Jan does seem to have developed his empathy for wrongly incarcerated victims and made this helpful statement about the tortures in Abu Ghraib "The disturbing Abu Ghraib photos remind us: Nothing justifies the use of torture in a democracy. No short-term gain, however urgent the cause, is worth undermining the bedrock democratic guarantee of rule of law and individual autonomy. Criminals and suspects may legitimately be incarcerated, but they may not be enslaved. They may be pressed to confess, but not physically coerced to do so. Whenever people are treated in a way that deprives them of their capacity to dissent, our very civilization is put at risk."
Posted by Tariq Kataria at 9:43 AM No comments: 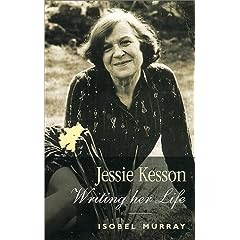 Jessie had a very harsh and deeply stressful introduction to life when she was born in the North east of Scotland.Born illegitimately , growing up in an under-resourced slum like part of Town , shipped out to an orphanage , then spending a spell in a mental institution having been diagnosed as suffering from neurasthenia ( the so called intellectuals disease that afflicted Virginia Woolf and so many clever people of the post feminist generation ), all before her 18th birthday.

Jessie not only overcame these tremendous hardships , but used the experiences to create a rich and diverse prose that led to many radio plays ; short stories and novels that laid ground for not only Woman writers to follow , but also ones from the regions , both those who managed to make it in London , but also those who were found to produce work in their own regions once local programmers found that local home produced work had a large and captive audience if only they were brave enough to encourage and develop the pool of local available talent.

Jessie ended up in London where she had many ungrateful and uninspiring jobs until she made her mark on Womans Hour , a career making break that gave her wonderful understated dramas a platform in the national arena.The real strength of her work was sticking to her experiences when forming the characters of her works as well as a fond childlike memory for the scenes and natural environments of her earliest recollections of youth.One aspect that gave her work the feel of release , rather than entrapment , of her early life experience is the kind and empathetic treatment of the authority and institutional figures.You always get the feel that all parties in the experience are victims deserving understanding and sympathy , the general effect is of any potential resentment being evaporated by forgiveness , goodwill and understanding.

Isobel Murray has written a gloriously detailed analysis of the role and place of Kessons work in the field of Woman writers in this piece which richly compliments the themes outlined in the Book.

And Linda Cracknell , in her superb blog gives a most illuminating description of the sights;sounds and smells that formed the natural elements of Jessies Human landscapes.

From what you have read so far it would be very wrong to assume Kessons forte was merely in the field of prose , on the contrary she was a very accomplished and highly skilled academic , more than able to research and make deeply penetrating observations on the life of Marie Currie as well as many other interesting and varied personalities.

Two nice quotes are worth recalling from the Book , on page 159 we find the code of honour that made life in the North Eastern farming communities a success or failure " Ask any cotter wife what is her greatest blessing , and she will tell you , " a good neighbour".And her greatest curse , and shell tell you , " a bad one".

And on page 245 we find Kesson describing the situation Marie Currie found herself in , a position that can be equally applied to the one Kesson would fully understand " Marie ( Currie) discovery as a girl is she is a Pole living unfree under Russian Rule...she has infinite determination in a life of much self-sacrifice..." we must believe we are gifted for something.And that this thing , at whatever cost , must be obtained"...." one must never let oneself be beaten down by persons or events."....Humanity needs " dreamers" who will make " tenacious efforts" without regard to material gain."

And that just about sums up the life and attitude of Jessie Kesson.
Posted by Tariq Kataria at 8:31 AM No comments: